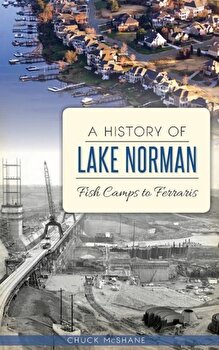 
On a muggy September day in 1959, North Carolina governor Luther Hodges set off the first charge of dynamite for the Cowan's Ford Dam project. The dam channeled Catawba River waters into the largest lake in North Carolina: Lake Norman. The project was the culmination of James Buchanan Duke's dream of an electrified South and the beginning of the region's future. Over the years, the area around Lake Norman transformed from a countryside of cornstalks and cattle fields to an elite suburb full of luxurious subdivisions and thirty-five-foot sailboats. Journalist and historian Chuck McShane traces the triumphs and troubles of Lake Norman from the region's colonial beginnings to its modern incarnation.

The Cat Who Lived with Anne Frank, Hardcover/David Lee Miller

Out of China: How the Chinese Ended the Era of Western Domination, Hardcover/Robert Bickers

Kingdoms of Faith: A New History of Islamic Spain, Hardcover/Brian A. Catlos

When Everything Changed: The Amazing Journey of American Women from 1960 to the Present, Paperback/Gail Collins