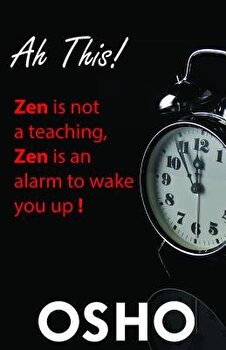 
The feeling that it is five minutes to midnight is known to many by now, and is often referred to as the "Doomsday Clock." As the many crises faced by humanity and planet Earth gather and tumble toward an emergency, some have even reduced the time left to two and a half minutes. It is no wonder that we feel increasingly helpless and at a loss what to do. Osho calls Zen not a teaching but an alarm to wake us up, because as individuals we are all deeply asleep, and this sleep has to be shattered. "For centuries, you have been asleep. Sleep has become your nature. You have forgotten what awareness is, what to be awake means." He wants us to wake up...before it is too late. Zen, more than any other religious or spiritual tradition, is relevant to such times as these, when none of our old approaches to solving problems will do. Immediate, urgent, and direct, Zen is not interested in answers or in questions, not interested in teaching at all, because it is not a philosophy. As Osho begins here, by quoting the great Zen master, Diae: "All the teachings of the sages, of the saints, of the masters, have expounded no more than this: they are commentaries on your sudden cry, 'Ah, This '" In this series of talks, Osho unfolds a selection of classic Zen stories and responds to questions. Along the way, we learn how the tools of Zen can be used to embrace uncertainty, to be at ease with not-knowing, to act decisively and with clarity and awareness. To "get woke," in other words, so that we can use each moment between now and midnight for transformation. About the Author: Osho is a contemporary mystic whose life and teachings have influenced millions of people of all ages, and from all walks of life. His often provocative and challenging teachings generate today more and more interest, and his readership is dramatically expanding around the world in more than fifty languages. People can easily recognize the wisdom of his insights, the broad sweep of his familiarity with both ancient and contemporary philosophical thought, and his ability to communicate in a way that is relevant to our lives and to the issues we are facing today. The Sunday Times (London) named Osho as one of the "1,000 Makers of the 20th Century." He is known around the world for his revolutionary contribution to meditation -- the science of inner transformation -- with the unique approach of his "OSHO Active Meditations" acknowledging the accelerated pace of contemporary life its unique challenges.