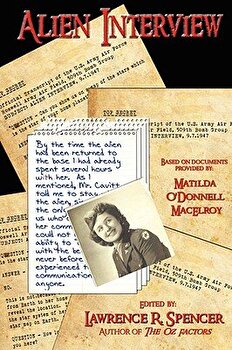 
Contributor(s): Author: Lawrence R. Spencer The content of this book is the letter, official Top Secret U.S. Army Air Force interview transcripts and personal notes I received from the late Matilda O'Donnell MacElroy. Her letter to me asserts that this material is based on a series of interviews she conducted with an extraterrestrial being as part of her official duty as a nurse in the U.S. Army Air Force. During July and August she interviewed a saucer pilot who crashed near Roswell, New Mexico on July 8th, 1947. The being identitied itself as an officer, pilot and engineer of The Domain Expeditionary Force, a race of beings who have been using the asteroid belt in our solar system as a intergalactic base of operations for the past 10,000 years.