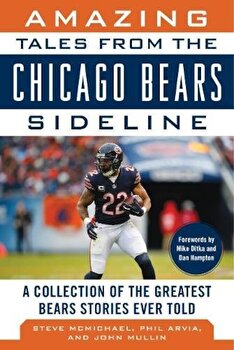 
More than just a football team, the Chicago Bears are a vital part of Chicago culture. After close to a century of play, the Bears have won more regular season games than any other NFL franchise. With twenty-seven players in the Hall of Fame and fourteen retired jerseys, it's no wonder the Bears are a beloved, storied franchise. But the Bears, like Chicago, are not just people; they are true personalities. In Amazing Tales From the Chicago Bears Sideline, Bears fans can read about the men who have made the Bears one of the greatest teams in pro football--George Halas, Dick Butkus, Mike Ditka, Jay Cutler, Richard Dent, Dan Hampton, and many others. Former Bears star Steve McMichael takes a front row seat in this collection of stories. Readers get an opportunity to relive the glory years of a charter NFL franchise--as seen through the eyes of a legendary player. McMichael covers it all, from training camp misadventures in Lake Forest, Illinois, and Platteville, Wisconsin, and Ditka's locker room tirades to nights on the town with teammates and behind-the-scenes glimpses of historic moments. From first kick-off to overtime play, Amazing Tales from the Chicago Bears Sideline covers some of the franchise's greatest moments and is a must-have for any true Bears fan.

A League of Their Own: The Secrets of Club Soccer Champions, Paperback/Steffen Siebert

The Endurance Handbook: How to Achieve Athletic Potential, Stay Healthy, and Get the Most Out of Your Body, Paperback/Philip Maffetone

Stillpower: Excellence with Ease in Sports and Life, Paperback/Garret Kramer

The Fix Is in: The Showbiz Manipulations of the NFL, MLB, NBA, NHL and NASCAR, Paperback/Brian Tuohy

Meeting Her Match: The Story of a Female Athlete-Coach, Before and After Title IX, Paperback/Debbie Millbern Powers

Dynasty: The Rise of the Boston Celtics, Paperback/Lew Freedman

Unwinding Madness: What Went Wrong with College Sportsaand How to Fix It, Paperback/***

The Complete Book of Tai Chi Chuan: A Comprehensive Guide to the Principles and Practice, Paperback/Wong Kiew Kit

Greatness Above the Noise, Paperback/Andy Purvis

A People's History of Sports in the United States: 250 Years of Politics, Protest, People, and Play, Paperback/Dave Zirin

Okinawan Bojutsu: The Cudgel Traditions of Shushi and Sueyoshi/Murakami Katsumi

Ping-Pong Diplomacy: The Secret History Behind the Game That Changed the World, Paperback/Nicholas Griffin