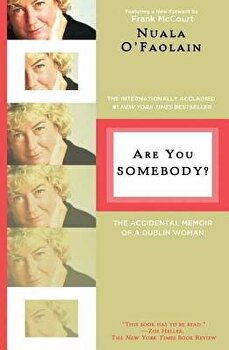 Are You Somebody?: The Accidental Memoir of a Dublin Woman, Paperback/Nuala O'Faolain


"You don't want the book to end; it glows with compassion and you want more, more because you know this is a fine wine of a life, richer as it ages."--Frank McCourt, author of Angela's Ashes One of nine children born into a penniless North Dublin family, Nuala O'Faolain was saved from a harrowing childhood by her love of books and reading. Though she ultimately became one of Ireland's best-known columnists, her professional success did little to ease her loneliness and longing for a deep connection to the world. Are You Somebody? distills her experiences into a wisdom that can only come from an obstinate refusal to shrink from life. This commemorative edition of her landmark memoir celebrates O'Faolain's remarkable life and work with a new foreword from Frank McCourt as well as additional archival materials. Strikingly vivid and starkly emotional, Are You Somebody? is, like O'Faolain herself, a singular example of courage, honesty, and bold living. About the Author: Nuala O'Faolain was a waitress, sales clerk, and maid; a university lecturer; a TV producer; and a columnist with The Irish Times . The author of three consecutive New York Times bestsellers, her books include the memoir Almost There , a follow-up to Are You Somebody? , as well as two novels: My Dream of You and The Story of Chicago May . She died in Dublin in 2008.

You Are What You Wear: What Your Clothes Reveal About You - Jennifer Baumgartner

You Aren't What You Eat: Fed Up with Gastroculture - Steven Poole

You Arent What You Eat Fed Up with Gastroculture - Steven Poole

If You Want Blood You've Got It | AC/DC

You Look Like a Thing and I Love You | Janelle Shane

What Do You Think You Are? | Brian Clegg

You Know You Want This | Kristen Roupenian

1001 Movies You Must See Before You Die | Steven Jay Schneider

1001 Buildings You Must See Before You Die | Mark Irving

You and Me, Me and You: Brothers | Miguel Tanco

So You Think You're a Bookworm? : Over 20 Hilarious Profiles of Book Lovers-from Sci-Fi Fanatics to Romance Readers | Jo Hoare

1001 Comics You Must Read Before You Die

1001 Movies You Must See Before You Die

1001 Whiskies You Must Try Before You Die

You Aren't What You Eat

1001 Wines You Must Taste Before You Die

101 Cult Movies You Must See Before You Die