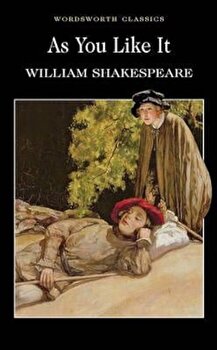 
This Wordsworth Edition includes an exclusive Introduction and Notes by Cedric Watts, Research Professor of English, University of Sussex. As You Like It is one of Shakespeare's finest romantic comedies, variously lyrical, melancholy, satiric, comic and absurd. Its boldly implausible plot generates a profusion of love-lorn men, a resourceful heroine in disguise, sexual ambiguity, sceptical philosophising, and finally a multiplicity of marriages. The ironic medley of pastoral artifice, romantic ardour and quizzical reflection has helped to make As You Like It perennially popular in the theatre. A recent production was deemed 'fresh, funny, sexy and, when it matters, deeply touching'. As You Like It is part of the Wordsworth Classics' Shakespeare Series, used in the workshops of the Royal Shakespeare Company. Every volume in the series has been newly edited by Cedric Watts, described by Edward Said as 'a man for whom the enjoyment and enrichment of friends and students is the main consideration in what he does'.

The Physicists: A Comedy in Two Acts, Paperback/Friedrich Durrenmatt

The Counselor: A Screenplay, Paperback/Cormac McCarthy

Diana of the Crossways, Hardback/George Meredith

Let There Be Light, Paperback/Dan Gordon