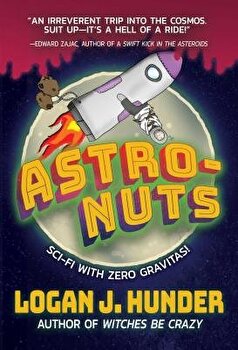 Laser-sharp zingers and out-of-this-world puns pile up at an astronomical pace in this zero gravitas sci-fi spoof from the author of Witches Be Crazy. Never meddle with unidentified spying objects . . . The year is: The Future. Mars and Earth are like that divorced couple who don't exactly like each other but have at least stopped fighting in public. Floating somewhere in between them, amid all the garbage and Gene Roddenberry's ashes, a transport vessel called the SS Jefferson is homeward bound. Its crew might have even made it on time for once, too... Captain Cox is no stranger to encountering the odd pickle in space, but when a tantalizingly derelict ship crosses paths with the Jefferson, he unwittingly parks in the middle of a NASA-ty interplanetary squabble. Faced with a marauding Martian and a squad of snobby secret agents, Cox and crew embark on a mad scramble across the solar system, to save themselves from either murder-via-space rifle of imprisonment in the notorious Guantanamo Docking Bay. Maybe they'll also get around to dealing with the biological weapon that accidentally wound up in their fridge, too. Join Logan J. Hunder ( Witches be Crazy ) in a riotously funny send-up of spaceships, space exploration, and all the stories we tell about both. Discover adventure, love, loss, gain, losing what was gained, gaining some of it back, and all the different ways the Outer Space Treaty can be violated. About the Author: Logan J. Hunder is a Canadian comedy writer who breaks into a wicked case of the shakes if he goes more than a half hour without making fun of something. He treats this rare self-diagnosed illness by rambling via text. His first novel, Witches Be Crazy , was published by Night Shade Books in 2015.