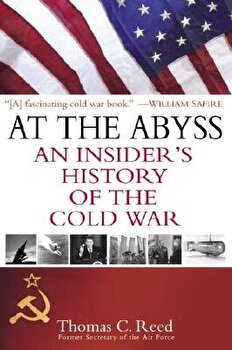 "The Cold War . . . was a fight to the death," notes Thomas C. Reed, "fought with bayonets, napalm, and high-tech weaponry of every sort--save one. It was not fought with nuclear weapons." With global powers now engaged in cataclysmic encounters, there is no more important time for this essential, epic account of the past half century, the tense years when the world trembled At the Abyss . Written by an author who rose from military officer to administration insider, this is a vivid, unvarnished view of America's fight against Communism, from the end of WWII to the closing of the Strategic Air Command, a work as full of human interest as history, rich characters as bloody conflict. Among the unforgettable figures who devised weaponry, dictated policy, or deviously spied and subverted: Whittaker Chambers--the translator whose book, Witness , started the hunt for bigger game: Communists in our government; Lavrenti Beria--the head of the Soviet nuclear weapons program who apparently killed Joseph Stalin; Col. Ed Hall--the leader of America's advanced missile system, whose own brother was a Soviet spy; Adm. James Stockwell--the prisoner of war and eventual vice presidential candidate who kept his terrible secret from the Vietnamese for eight long years; Nancy Reagan--the "Queen of Hearts," who was both loving wife and instigator of palace intrigue in her husband's White House. From Eisenhower's decision to beat the Russians at their own game, to the "Missile Gap" of the Kennedy Era, to Reagan's vow to "lean on the Soviets until they go broke"--all the pivotal events of the period are portrayed in new and stunning detail with information only someone on the front lines and in backrooms could know. Yet At the Abyss is more than a riveting and comprehensive recounting. It is a cautionary tale for our time, a revelation of how, "those years . . . came to be known as the Cold War, not World War III." From the Hardcover edition. About the Author: Thomas C. Reed is a former Secretary of the Air Force. He has been Director of National Reconnaissance, a Special Assistant to President Reagan for National Security Policy, and a consultant to the Director of Lawrence Livermore National Laboratory, where much of the country's nuclear weapons research takes place. He lives in northern California.