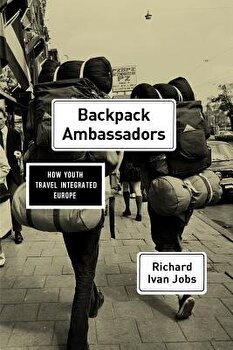 Even today, in an era of cheap travel and constant connection, the image of young people backpacking across Europe remains seductively romantic. In Backpack Ambassadors , Richard Ivan Jobs tells the story of backpacking in Europe in its heyday, the decades after World War II, revealing that these footloose young people were doing more than just exploring for themselves. Rather, with each step, each border crossing, each friendship, they were quietly helping knit the continent together. From the Berlin Wall to the beaches of Spain, the Spanish Steps in Rome to the Pudding Shop in Istanbul, Jobs tells the stories of backpackers whose personal desire for freedom of movement brought the people and places of Europe into ever-closer contact. As greater and greater numbers of young people trekked around the continent, and a truly international youth culture began to emerge, the result was a Europe that, even in the midst of Cold War tensions, found its people more and more connected, their lives more and more integrated. Drawing on archival work in eight countries and five languages, and featuring trenchant commentary on the relevance of this period for contemporary concerns about borders and migration, Backpack Ambassadors brilliantly recreates a movement that was far more influential and important than its footsore travelers could ever have realized. About the Author: Richard Ivan Jobs is professor of history at Pacific University in Oregon. He is the author of Riding the New Wave: Youth and the Rejuvenation of France after the Second World War and coeditor of Transnational Histories of Youth in the Twentieth Century .