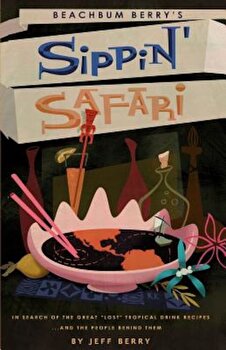 
The new book by the author of The Grog Log , Intoxica and Taboo Table . Beach Bum Berry, as he is better known, is America's leading authority on tropical drinks and polynesian pop culture. In this all new book, Berry not only offers up tantilizing new drink recipes, but tells stories about some of the most famous figures of their time. The Bum applies the same dogged research to the untold stories of the people behind the drinks. Stories culled from over 100 interviews with those who actually created the mid-century Tiki scene -- people as colorful as the drinks they invented, or served, or simply drank. People like: Leon Lontoc, the Don The Beachcomber's waiter who served Frank Sinatra and Marlon Brando by night, and acted in their movies by day; Henry Riddle, the Malibu Seacomber bartender who fed items about his famous customers to infamous gossip columnist Louella Parsons, till the day Howard Hughes found him out; and Duke Kamanamoku, whose manager turned him from Olympic champion into reluctant restaurateur.