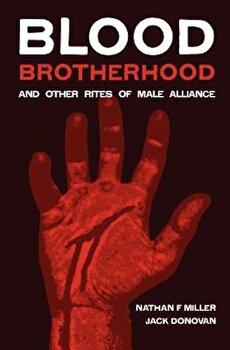 Blood-Brotherhood and Other Rites of Male Alliance, Paperback/Nathan F. Miller


"Fresh and truthful reflections on modern masculinity..." - Vice Magazine Blood-brotherhoods and similar rites have been employed by men to mark friendships and alliances for thousands of years. Evidence of the practice can be found in the lore, literature and recorded history of most cultures-from Norse and Celtic mythologies to the tribes of Africa, Australia and the South Pacific, to the fiction of Jack London and Mark Twain. This survey of blood-brotherhood rites is a toolbox for the imagination, containing a wealth of research about blood-brotherhood myths and practices from a wide variety of cultures and time periods, including excerpted texts and original translations by Nathan F. Miller. The second revised edition of Blood-Brotherhood fromDISSONANT HUM] was written for a general male audience. Blood-Brotherhood and Other Rites of Male Alliance remains the most comprehensive cross-cultural survey of blood-brotherhood myths and traditions currently available.

Lives in Transit: Violence and Intimacy on the Migrant Journey, Paperback/Wendy A. Vogt

Payback: Debt and the Shadow Side of Wealth, Paperback/Margaret Atwood

The Boy Behind the Face, Paperback/Jenifer C. Orefice

In the Field: Life and Work in Cultural Anthropology, Paperback/George Gmelch

Distraction Addiction: Getting the Information You Need and the Communication You Want, Without Enraging Your Family, Annoying Your Colleague, Hardcover/Alex Soojung Pang

Strangers in Their Own Land: Anger and Mourning on the American Right, Hardcover/Arlie Russell Hochschild

After Life: Ways We Think about Death/Merrie-Ellen Wilcox

Natural Causes: An Epidemic of Wellness, the Certainty of Dying, and Killing Ourselves to Live Longer, Hardcover/Barbara Ehrenreich

Up Above and Down Below, Hardcover/Paloma Valdivia