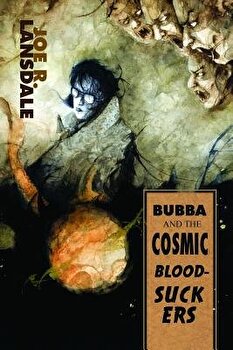 
Description BUBBA AND THE COSMIC BLOOD-SUCKERS / BUBBA HO-TEP Now available in paperback for the first time -- BUBBA AND THE COSMIC BLOOD-SUCKERS by Joe R. Lansdale Also includes the award-winning BUBBA HO-TEP novella, inspiration behind the Don Coscarelli film starring Bruce Campbell and Ossie Davis, in the same paperback book BUBBA AND THE COSMIC BLOOD-SUCKERS Years before facing the cowboy hat-wearing mummy Bubba Ho-Tep in an East Texas retirement home, Elvis finds himself battling interdimensional body-desiccating beings at the behest of his manager, Colonel Parker. Joining him on this journey is clairvoyant Blind Man, master-planner Jack, hammer-swinging John Henry, bodyguard Johnny Smack, and trainee Jenny Jo Dallas. Down in New Orleans awaits the Big Mama, who would like nothing more than to drain the "Jacked-Up Mojo" from the group. BUBBA HO-TEP In this 1994 story that inspired the cult-classic Don Coscarelli film, Elvis is spending his golden years at the Mud Creek Shady Grove Convalescence Home alongside a man claiming to be President John F. Kennedy. Strange sights and sounds leads the two to discover an ancient Egyptian mummy stalking the corridors of their retirement home. They soon face off against the monster...but will anyone believe their story or shrug it off as more tall tales? TCB. JOE R. LANSDALE The author of fifty novels and more than three hundred short stories, his work has appeared in national anthologies, magazines, and collections, as well as numerous foreign publications. He has written for comics, television, film, newspapers, and Internet sites. His work has been collected in at least thirty short-story collections, and he has edited or co-edited over a dozen anthologies. Lansdale has received the Edgar Award, eleven Bram Stoker Awards, the Horror Writers Association Lifetime Achievement Award, the British Fantasy Award, the Grinzani Cavour Prize for Literature, the Herodotus Historical Fiction Award, the Inkpot Award for Contributions to Science Fiction and Fantasy, and many others. (c) 2019 BookVoice Publishing www.bookvoicepublishing.com

Organisms and Artifacts: Design in Nature and Elsewhere (Life and Mind: Philosophical Issues in Biology and Psychology)

Moods and women and men and once again moods