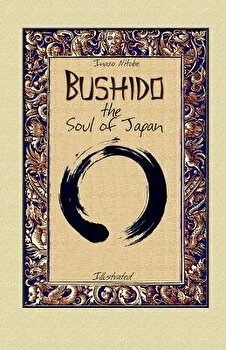 
Bushido is the code of moral principles which the knights were required or instructed to observe. It is not a written code; at best it consists of a few maxims handed down from mouth to mouth or coming from the pen of some well-known warrior or savant. More frequently it is a code unuttered and unwritten, possessing all the more the powerful sanction of veritable deed, and of a law written on the fleshly tablets of the heart. It was founded not on the creation of one brain, however able, or on the life of a single personage, however renowned. It was an organic growth of decades and centuries of military career. It, perhaps, fills the same position in the history of ethics that the English Constitution does in political history; yet it has had nothing to compare with the Magna Charta or the Habeas Corpus Act. True, early in the seventeenth century Military Statutes (Buk Hatto) were promulgated; but their thirteen short articles were taken up mostly with marriages, castles, leagues, etc., and didactic regulations were but meagerly touched upon. We cannot, therefore, point out any definite time and place and say, "Here is its fountain head." Only as it attains consciousness in the feudal age, its origin, in respect to time, may be identified with feudalism. But feudalism itself is woven of many threads, and Bushido shares its intricate nature. As in England the political institutions of feudalism may be said to date from the Norman Conquest, so we may say that in Japan its rise was simultaneous with the ascendancy of Yoritomo, late in the twelfth century. As, however, in England, we find the social elements of feudalism far back in the period previous to William the Conqueror, so, too, the germs of feudalism in Japan had been long existent before the period mentioned.

The Ethiopian Borderlands. Essays in Regional History from Ancient Times to the End of the 18th Century, Paperback/Richard Pankhurst

Al Qaeda and What It Means to be Modern, Paperback/John Gray

This Island's Mine, Paperback/Philip Osment