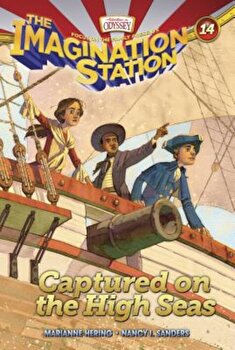 
British warships battle with American privateers in this high sea adventure. Cousins Patrick and Beth have landed on the Royal Louis in the middle of the Revolutionary War. Cannonballs fly and swords slash. They're capturedNow they face even more dangers. Will their new friend James Forten be sold by the British into the West Indies slave trade? Or will they all be sentenced to the overcrowded prison ship floating near shore where scores of prisoners die from filth and disease? Patrick and Beth help plan a daring escape as they witness firsthand the deeds of brave heroes who fought to make America the land of the free.

The Invasion of the Potty Snatchers, Hardcover/Dav Pilkey

The Book of Wizard Parties: In Which the Wizard Shares the Secrets of Creating Enchanted Gatherings, Hardcover/Sterling Publishing Company

You See a Circus. I See..., Paperback/Mike Downs

I'm the Scariest Thing in the Jungle!, Hardcover/David Derrick