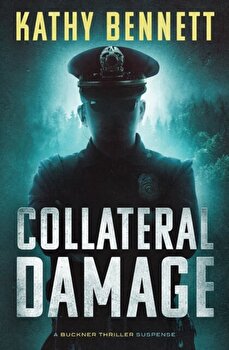 
A kidnapped pregnant nurse. A crazed disgraced cop. Let the psychological warfare begin... Nurse Amber Buckner is dealing with her husband's ultimatum regarding her unplanned pregnancy. Unfortunately, her frantic state distracts her from recognizing something is wrong when approached by a uniformed police officer. She's kidnapped and realizes her abductor is starved for love--and the affection he doesn't receive willingly he takes by force. To stay alive, Amber cleverly convinces her captor he is the father of the child she's carrying. The maniac seesaws between love and hate for his captive. Matching wits with her abductor, she prays her husband, an LAPD cop, will grasp what's happened and rescue her. What Amber doesn't know is that her husband isn't looking for her--no one is--the madman has seen to that. Collateral Damage is the first book in Kathy Bennett's, Buckner Police Procedural Thriller Trilogy. If you like authentic crime told in an arresting story, you can't go wrong reading this fast-paced, riveting, drama told by an award-winning retired LAPD officer.

Collateral Damage : Britain, America and Europe in the Age of Trump

My Damage: The Story of a Punk Rock Survivor

The Tusk That Did the Damage | Tania James