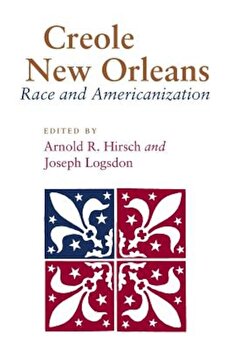 
This collection of six original essays explores the peculiar ethnic composition and history of New Orleans, which the authors persuasively argue is unique among American cities. The focus of Creole New Orleans is on the development of a colonial Franco-African culture in the city, the ways that culture was influenced by the arrival of later immigrants, and the processes that led to the eventual dominance of the Anglo-American community. Essays in the book's first section focus not only on the formation of the curiously blended Franco-African culture but also on how that culture, once established, resisted change and allowed New Orleans to develop along French and African creole lines until the early nineteenth century. Jerah Johnson explores the motives and objectives of Louisiana's French founders, giving that issue the most searching analysis it has yet received. Gwendolyn Midlo Hall, in her account of the origins of New Orleans' free black population, offers a new approach to the early history of Africans in colonial Louisiana. The second part of the book focuses on the challenge of incorporating New Orleans into the United States. As Paul F. LaChance points out, the French immigrants who arrived after the Louisiana Purchase slowed the Americanization process by preserving the city's creole culture. Joseph Tregle then presents a clear, concise account of the clash that occurred between white creoles and the many white Americans who during the 1800s migrated to the city. His analysis demonstrates how race finally brought an accommodation between the white creole and American leaders. The third section centers on the evolution of the city's race relations during the nineteenth and twentieth centuries. Joseph Logsdon and Caryn Cosse Bell begin by tracing the ethno-cultural fault line that divided black Americans and creole through Reconstruction and the emergence of Jim Crow. Arnold R. Hirsch pursues the themes discerned by Logsdon and Bell from the turn of the century to the 1980s, examining the transformation of the city's racial politics. Collectively, these essays fill a major void in Louisiana history while making a significant contribution to the history of urbanization, ethnicity, and race relations. The book will serve as a cornerstone for future study of the history of New Orleans."

New Atlantis: Musicians Battle for the Survival of New Orleans

The Wicked + The Divine - Volume 8: Old is the New New | Kieron Gillen