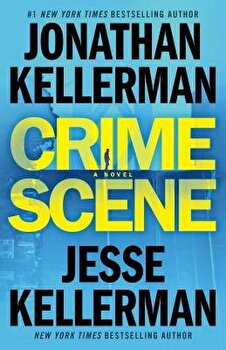 NEW YORK TIMES BESTSELLER - A former star athlete turned deputy coroner is drawn into a brutal, complicated murder in this psychological thriller from a father-son writing team that delivers "brilliant, page-turning fiction" (Stephen King). Natural causes or foul play? That's the question Clay Edison must answer each time he examines a body. Figuring out motives and chasing down suspects aren't part of his beat--not until a seemingly open-and-shut case proves to be more than meets his highly trained eye. Eccentric, reclusive Walter Rennert lies cold at the bottom of his stairs. At first glance the scene looks straightforward: a once-respected psychology professor, done in by booze and a bad heart. But his daughter Tatiana insists that her father has been murdered, and she persuades Clay to take a closer look at the grim facts of Rennert's life. What emerges is a history of scandal and violence, and an experiment gone horribly wrong that ended in the brutal murder of a coed. Walter Rennert, it appears, was a broken man--and maybe a marked one. And when Clay learns that a colleague of Rennert's died in a nearly identical manner, he begins to question everything in the official record. All the while, his relationship with Tatiana is evolving into something forbidden. The closer they grow, the more determined he becomes to catch her father's killer--even if he has to overstep his bounds to do it. The twisting trail Clay follows will lead him into the darkest corners of the human soul. It's his job to listen to the tales the dead tell. But this time, he's part of a story that makes his blood run cold. Praise for Crime Scene "You could drive yourself crazy trying to figure out who wrote what. . . . But whoever came up with the fine line, 'When I meet new people, they're usually dead, ' should pat himself on the back." --The New York Times Book Review "A terrific book . . . Put Crime Scene at the top of your reading pile." -- Bookreporter "A character-driven, intricately plotted whodunit . . . Mystery readers will devour the book and look forward to the next father and son collaboration." --Press Republican About the Author: Jonathan Kellerman is the #1 New York Times bestselling author of more than forty crime novels, including the Alex Delaware series, The Butcher's Theater, Billy Straight, The Conspiracy Club, Twisted, True Detectives, and The Murderer's Daughter . With his wife, bestselling novelist Faye Kellerman, he co-authored Double Homicide and Capital Crimes . With his son, bestselling novelist Jesse Kellerman, he co-authored The Golem of Hollywood and The Golem of Paris . He is also the author of two children's books and numerous nonfiction works, including Savage Spawn: Reflections on Violent Children and With Strings Attached: The Art and Beauty of Vintage Guitars . He has won the Goldwyn, Edgar, and Anthony awards and the Lifetime Achievement Award from the American Psychological Association, and has been nominated for a Shamus Award. Jonathan and Faye Kellerman live in California, New Mexico, and New York. Jesse Kellerman won the Princess Grace Award for best young American playwright and is the author of Sunstroke, Trouble, The Genius (for which he won the 2010 Grand Prix des Lectrices de Elle ), The Executor, and Potboiler (for which he was nominated for the Edgar Award for Best Novel). He lives in California.