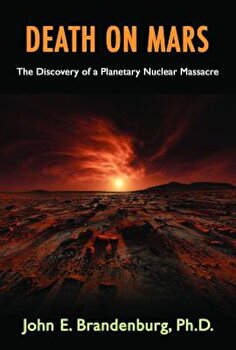 
New proof of a nuclear catastrophe on MarsIn an epic story of discovery, strong evidence is presented for a dead civilization on Mars and the shocking reason for its demise: an ancient planetary-scale nuclear massacre leaving isotopic traces of vast explosions that endure to our present age. The story told by a wide range of Mars data is now clear. Mars was once Earth-like in climate, with an ocean and rivers, and for a long period became home to both plant and animal life, including a humanoid civilization. Then, for unfathomable reasons, a massive thermo-nuclear explosion ravaged the centers of the Martian civilization and destroyed the biosphere of the planet. But the story does not end there. This tragedy may explain Fermi's Paradox, the fact that the cosmos, seemingly so fertile and with so many planets suitable for life, is as silent as a graveyard. We must immediately send astronauts to Mars to maximize our knowledge of what happened there, and learn how to avoid Mars fate. Includes an 8-page color section."

There's a Spiritual Solution to Every Problem, Paperback/Wayne W. Dyer

You Have 4 Minutes to Change Your Life: Simple 4-Minute Meditations for Inspiration, Transformation, and True Bliss, Paperback/Rebekah Borucki

A Medical Intuitive Reveals the Wonders of Purslane, Paperback/Elsie Belcheff

Everyday Herbs in Spiritual Life: A Guide to Many Practices, Paperback/Micheal J. Caduto

There Are No Sad Dogs in Heaven: Finding Comfort After the Loss of a Pet, Paperback/Sonya Fitzpatrick

The Witch's Spellbook: Enchantments, Incantations, and Rituals from Around the World, Hardcover/Sarah Bartlett

I Ching: The Essential Translation of the Ancient Chinese Oracle and Bookof Wisdom, Paperback/John Minford

The Art of Healing: Uncovering Your Inner Wisdom and Potential for Self-Healing, Paperback/Bernie S. Siegel

The Journey: A Practical Guide to Healing Your Life and Setting Yourself Free, Paperback/Brandon Bays