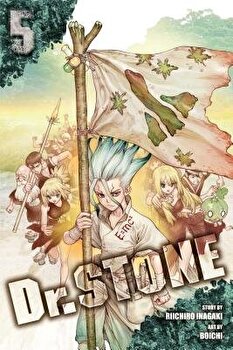 Description Imagine waking to a world where every last human has been mysteriously turned to stone... One fateful day, all of humanity turned to stone. Many millennia later, Taiju frees himself from the petrification and finds himself surrounded by statues. The situation looks grim--until he runs into his science-loving friend Senku Together they plan to restart civilization with the power of science The Grand Bout has begun For Senku's Kingdom of Science to succeed, they need to win, but standing in their way is the ferocious and powerful Magma Kinro's first up against him, but his bad eyesight severely handicaps him. A pair of "science eyes" might be just the thing to turn this battle around About the author Boichi is a Korean-born artist currently living and working in Japan. His previous works include Sun-Ken Rock and Terra Formars Asimov . Riichiro Inagaki is a Japanese manga writer from Tokyo. He is the writer for the sports manga series Eyeshield 21 , which was serialized in Weekly Shonen Jump .