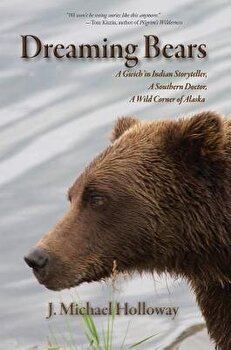 Dreaming Bears is the true story of the rare friendship that develops between a young medical student with deep roots in the South and an elderly Indian couple in the wilds of northeast Alaska. In 1961, Mike Holloway, his brother Ted, and a college friend set out from South Carolina to spend the summer hiking in Arctic Alaska, intending to live off the land. They end up in the homeland of the Gwich'in - the northernmost Indians in North America. The young men charter a small plan into the isolated village of Venetie, where the tribal chief directs them to the remote cabins of Johnny and Sarah Frank. The elderly Gwich'in couple lived a thirty-five-mile walk from the village and more than a hundred air miles from the closest road. Johnny was a well-known storyteller and former medicine man. Sarah made their home welcoming with warm, calm kindness - her well-worn hands seldom idle. His rich encounters in Gwich'in country deepen Mike's love of wild land and his respect for those who depend upon it for their survival. The experience alters his life. Mike becomes the adopted grandson of Johnny and Sarah, returning to Alaska as a doctor and advocate for the land and its people. About the Author Born in Greenwood, South Carolina, Mike Holloway studied medicine in South Carolina and Virginia. He became a Peace Corps doctor and worked for the regional native hospital in southwest Alaska, before moving to the Alaska Native Medical Center in Anchorage in 1973. Mike also worked as a subsistence advocate and village liaison for the Alaska Rural Community Action Program before returning to the medical center as chief of orthopedics. After retiring, Mike taught orthopedics in Uganda, Cameroon, Bhutan, and Nicaragua. He is married to Margie Gibson and lives near Indian, Alaska.