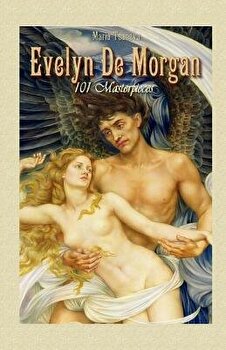 
Evelyn De Morgan (1855 - 1919) was an English Pre-Raphaelite painter. During her lifetime Evelyn De Morgan produced approximately 102 oil paintings and over 300 drawings. At first glance, works like Flora (1894), Cadmus and Harmonia (1877), Eos (1895) and Night and Sleep (1878) appear to be that of a typical mid-century literary painter influenced by the work of Spencer Stanhope, Watts and Burne-Jones. Consequently, this was the way in which most contemporary critics assessed her paintings: Many do reflect the usual conventions and literary themes of late Victorian art with its Pre-Raphaelite traces and neo-classical tendencies. However, looking closer, one discovers Symbolist works that employ the language of Christian allegory to reveal the artist's engagement with the contemporary issues of her time. These works may be divided into three categories: spiritualist allegories, depictions of sacred heroines, and war paintings.