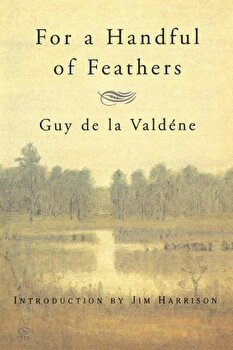 
A lifelong hunter and wild-game gourmet who has traveled the globe on expeditions with world-class sportsmen, Guy de la Valdene purchased an 800-acre farm outside Tallahassee and set out to raise and hunt his favorite game bird, bobwhite quail. But de la Valdene is also a naturalist at heart, and as he planted trees and divided fields, he found that running the farm compelled him to operate as both hunter and preservationist, predator and protector. De la Valdene structures his reflections around a year in the life cycle of the bobwhite quail, from one generation's birth through mating and the raising of their young. Along the way, he gets pulled along on some side trips: to a masterpiece of controlled burning performed by a Vietnam veteran in a helicopter with 300 gallons of napalm, and to his own adventures when he improvises some dam-raising to fill his pond. For a Handful of Feathers reconciles a passion for hunting with a deep sentiment for the wild. Learning early on that while his work on the farm may awe his friends, he can never impress nature, de la Valdene tries, with sensitivity and patience, to find his, and perhaps society's, place in the natural world. "A classic that compares well with Turgenev's A Sportsman's Notebook . . . simply and beautifully written."- The Bloomsbury Review "For a Handful of Feathers is an American classic . . . a book as unapologetic as it is thoughtful about blood sport . . . . the verbal spark and pace of a fine novel."- Gray's Sporting Journal "A gem that will appeal not only to hunters but to all readers who love the land."- Publishers Weekly