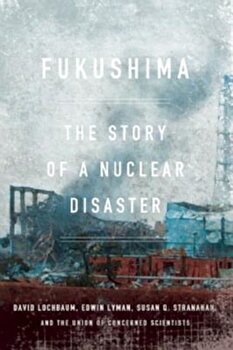 Fukushima: The Story of a Nuclear Disaster, Paperback/David Lochbaum


``A gripping, suspenseful page-turner`` ( Kirkus Reviews ) with a ``fast-paced, detailed narrative that moves like a thriller`` ( International Business Times ), Fukushima teams two leading experts from the Union of Concerned Scientists, David Lochbaum and Edwin Lyman, with award-winning journalist Susan Q. Stranahan to give us the first definitive account of the 2011 disaster that led to the worst nuclear catastrophe since Chernobyl. Four years have passed since the day the world watched in horror as an earthquake large enough to shift the Earth's axis by several inches sent a massive tsunami toward the Japanese coast and Fukushima Daiichi nuclear power plant, causing the reactors' safety systems to fail and explosions to reduce concrete and steel buildings to rubble. Even as the consequences of the 2011 disaster continue to exact their terrible price on the people of Japan and on the world, Fukushima addresses the grim questions at the heart of the nuclear debate: could a similar catastrophe happen again, and--most important of all--how can such a crisis be averted?

True Sex: The Lives of Trans Men at the Turn of the Twentieth Century, Hardcover/Emily Skidmore

Women of the Raj: The Mothers, Wives, and Daughters of the British Empire in India, Paperback/Margaret MacMillan

The Pyramids and the Pentagon: The Government's Top Secret Pursuit of Mystical Relics, Ancient Astronauts, and Lost Civilizations, Paperback/Nick Redfern

Beneath the Surface: Killer Whales, Seaworld, and the Truth Beyond Blackfish, Paperback/John Hargrove

Like a Hurricane: The Indian Movement from Alcatraz to Wounded Knee, Paperback/Paul Chaat Smith

The Reflective Practitioner: How Professionals Think in Action, Paperback/Donald A. Schon

The Far Away Brothers: Two Young Migrants and the Making of an American Life, Paperback/Lauren Markham

Harlem Is Nowhere: A Journey to the Mecca of Black America, Paperback/Sharifa Rhodes-Pitts

Slaughterhouse: The Shocking Story of Greed, Neglect, and Inhumane Treatment Inside the U.S. Meat Industry, Paperback/Gail A. Eisnitz

Gender, Sex and Gossip in Ambridge: Women in the Archers, Paperback/Cara Courage

We Should All Be Mirandas: Life Lessons from Sex and the City's Most Underrated Character, Hardcover/Chelsea Fairless

The Biopolitics of Feeling: Race, Sex, and Science in the Nineteenth Century, Paperback/Kyla Schuller