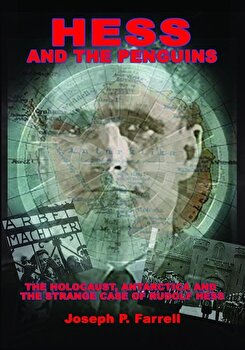 Hess and the Penguins: The Holocaust, Antarctica and the Strange Case of Rudolf Hess, Paperback/Joseph P. Farrell


Pursuing his investigations of WWII machinations, secret international agreements, breakaway civilizations and hidden wars in Antarctica, author and researcher Joseph P. Farrell examines the continuing mystery of Rudolf Hess, his sudden flight to Scotland, his supposed imprisonment at Spandau Prison in Berlin and how his flight affected affairs in Europe, Israel, Antarctica and elsewhere. Farrell looks at Hess' mission to make peace with Britain and get rid of Hitler--even a plot to fly Hitler to Britain for captureHow much did Goring and Hitler know of Rudolf Hess' subversive plot, and what happened to Hess? Why was a doppleganger put in Spandau Prison and then ``suicided``? Did the British use an early form of mind control on Hess' double? John Foster Dulles of the OSS and CIA suspected as much. Farrell also uncovers the strange death of Admiral Richard Byrd's son in 1988, about the same time of the death of Hess. What was Hess' connection to Antarctica? It is Farrell at his best--uncovering the special operations and still-secret activities of WWII and the breakaway civilization.

Riddle in the Tale, Paperback/Taffy Thomas

The Myth of Race: The Troubling Persistence of an Unscientific Idea, Paperback/Robert Wald Sussman

Can't Buy My Love: How Advertising Changes the Way We Think and Feel, Paperback/Jean Kilbourne

Behind the Carbon Curtain: The Energy Industry, Political Censorship, and Free Speech, Paperback/Jeffrey A. Lockwood

The Israelis: Ordinary People in an Extraordinary Land (Updated in 2008), Paperback/Donna Rosenthal

Protecting Children and Adults from Abuse After Savile, Paperback/Marcus Erooga

Hubris: The Inside Story of Spin, Scandal, and the Selling of the Iraq War, Paperback/Michael Isikoff

The Philadelphia Experiment Murder: Parallel Universes and the Physics of Insanity, Paperback/Alexandra Bruce