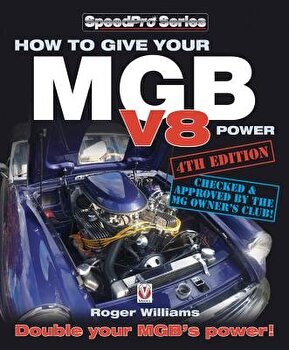 How to Give Your MGB V8 Power - Fourth Edition: Double Your Mgb's Power!/Roger Williams


Description No one contemplating an MGB V8 engine conversion should start the project without reading this book, which is based on the real world experience of many owners and specialists who have re-engined MGBs in the past. Avoid expensive mistakes and pitfalls and end up with a car that performs, handle and brakes superbly by following the detailed advice compiled over many years by MGB expert, Roger Williams. About the Author Roger Williams was born in 1940. Aircraft were his first love, and he joined the de Havilland Aircraft Company after leaving school, but quickly added motor cars to his list of prime interests. He completed his apprenticeship and studies, and built two Ford-based 'specials' before family and career interests took pride of place. However in 1986 he started his own consultancy business, which allowed him to restore numerous MGBs, a Triumph TR6 and a Triumph Stag. An acknowledged expert in his field, he has written several books covering both Triumph and MGB models, including titles for Veloce's SpeedPro series, Enthusiast's Restoration Manual series, and The Essential Buyer's Guides.