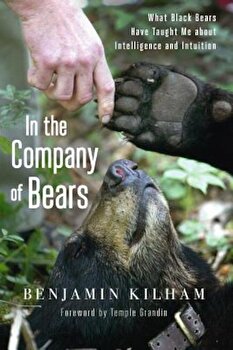 In the Company of Bears: What Black Bears Have Taught Me about Intelligence and Intuition, Paperback/Benjamin Kilham


In In the Company of Bears , originally published in hardcover as Out on a Limb , Ben Kilham invites us into the world he has come to know best: the world of black bears. For decades, Kilham has studied wild black bears in a vast tract of Northern New Hampshire woodlands. At times, he has also taken in orphaned infants-feeding them, walking them through the forest for months to help them decipher their natural world, and eventually reintroducing them back into the wild. Once free, the orphaned bears still regard him as their mother. And one of these bears, now a 17-year-old female, has given him extraordinary access to her daily life, opening a rare window into how she and the wild bears she lives among carry out their daily lives, raise their young, and communicate. Witnessing this world has led to some remarkable discoveries. For years, scientists have considered black bears to be mostly solitary. Kilham's observations, though, reveal the extraordinary interactions wild bears have with each other. They form friendships and alliances; abide by a code of conduct that keeps their world orderly; and when their own food supplies are ample, they even help out other bears in need. Could these cooperative behaviors, he asks, mimic behavior that existed in the animal that became human? In watching bears, do we see our earliest forms of communications unfold? Kilham's dyslexia once barred him from getting an advanced academic degree, securing funding for his research, and publishing his observations in the scientific literature. After being shunned by the traditional scientific community, though, Kilham's unique findings now interest bear researchers worldwide. His techniques even aid scientists working with pandas in China and bears in Russia. Moreover, the observation skills that fueled Kilham's exceptional work turned out to be born of his dyslexia. His ability to think in pictures and decipher systems makes him a unique interpreter of the bear's world. In the Company of Bears delivers Kilham's fascinating glimpse at the inner world of bears, and also makes a passionate case for science, and education in general, to open its doors to different ways of learning and researching-doors that could lead to far broader realms of discovery.