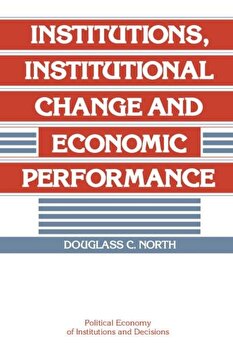 
Continuing his groundbreaking analysis of economic structures, Douglass North develops an analytical framework for explaining the ways in which institutions and institutional change affect the performance of economies, both at a given time and over time. Institutions exist, he argues, due to the uncertainties involved in human interaction; they are the constraints devised to structure that interaction. Yet, institutions vary widely in their consequences for economic performance; some economies develop institutions that produce growth and development, while others develop institutions that produce stagnation. North first explores the nature of institutions and explains the role of transaction and production costs in their development. The second part of the book deals with institutional change. Institutions create the incentive structure in an economy, and organizations will be created to take advantage of the opportunities provided within a given institutional framework. North argues that the kinds of skills and knowledge fostered by the structure of an economy will shape the direction of change and gradually alter the institutional framework. He then explains how institutional development may lead to a path-dependent pattern of development. In the final part of the book, North explains the implications of this analysis for economic theory and economic history. He indicates how institutional analysis must be incorporated into neo-classical theory and explores the potential for the construction of a dynamic theory of long-term economic change. Douglass C. North is Director of the Center of Political Economy and Professor of Economics and History at Washington University in St. Louis. He is a past president of the Economic History Association and Western Economics Association and a Fellow, American Academy of Arts and Sciences. He has written over sixty articles for a variety of journals and is the author of The Rise of the Western World: A New Economic History (CUP, 1973, with R.P. Thomas) and Structure and Change in Economic History (Norton, 1981). Professor North is included in Great Economists Since Keynes edited by M. Blaug (CUP, 1988 paperback ed.)