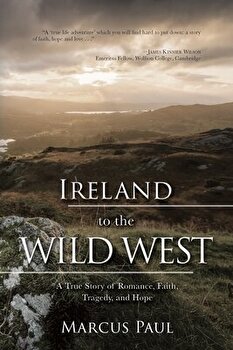 Ireland to the Wild West: A True Story of Romance, Faith, Tragedy, and Hope, Paperback/Marcus Paul

Born in 1846 in Ireland at the start of the "Great Hunger," James Kinnier Wilson emigrated to Philadelphia to start a new life at seventeen years old. After his life took a dramatic turn, he found himself attending Princeton and then a college in Scotland, where he met Agnes Hately, the talented daughter of a famous figure in the Scottish "Disruption"--the emergence of the Free Church of Scotland. Agnes and James, now newlyweds, crossed the dangerous Atlantic and settled in rural New Jersey. While there, Agnes wrote intimate letters home about her children, the people around her, the church, and the dangers of endemic disease. Called in 1878 to the Wild West to found churches and to farm, Agnes again revealed in detail the conditions of her life on the frontier and her impressions of American women, cowboys, servant girls, church-goers, and provides some never before seen detail to what is called the "Last Indian Raid in Kansas." In Ireland to the Wild West , Marcus Paul uses these letters penned by Agnes to take readers on a journey through Agnes and James' engagement, marriage, dangerous travels, and their arrival and life in America. Through her letters, a treasure trove for historians, readers will gain a unique insight to that time period and will find an engrossing and inspiring story of romance, faith, tragedy, and hope.