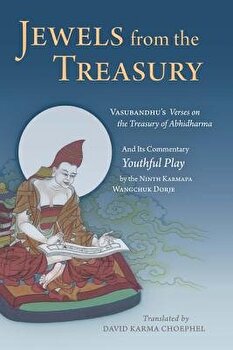 
Though the abhidharma is recognized as one of the major topics of the Buddhist teachings, up until now there have been few translations of any of the great texts on it available in a Western language. This book gives thorough explanations of all the fundamental concepts and terms found in the Buddhist teachings. It presents the nature of the phenomena we experience, describes the karma and afflictions that create suffering, and shows the factors of the path that lead to liberation. It is like an encyclopedia of Buddhism that thoroughly explains the meaning of the many different technical terms found in the sutras, vinaya, and other Buddhist teachings if you are wondering what something you have read in a Buddhist text really means, there is a good chance it is explained in this book. It thus provides an invaluable aid to students who want to deepen their understanding not only of the abhidharma, but of all the Buddhist teachings." About the Author: Vasubandhu (fourth century CE) took ordination at Nalanda Monastery at a young age and studied the Foundation Vehicle teachings. He then went to Kashmir where he mastered the philosophies of many different Buddhist and non-Buddhist schools. He had thousands of students and was one of the most prolific Buddhist authors in ancient India; many of his works are preserved in the Tibetan Tengyur. The Ninth Karmapa Wangchuk Dorje (1556-1603) is best known as the author of Pointing Out the Dharmakaya and other texts on the practice of mahamudra. He also wrote several commentaries on philosophy including this text as well as Feast for the Fortunate, a commentary on madhyamika philosophy. David Karma Choephel studied Buddhist philosophy at the Varja Vidya Institute in Namo Buddha, Nepal, and Sarnath, India. He currently serves as Khenchen Thrangu Rinpoche's main English-language translator, and also translates for the Gyalwang Karmapa and the Kagyu Monlam.

The Family Jewels | Marina and the Diamonds

Jewels In The Crown: All Star Duets With The Queen | Aretha Franklin

The Dreaming Jewels, To Marry Medusa, Venus Plus X