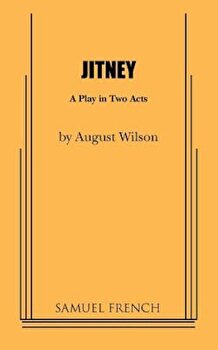 
Drama Characters: 8 male, 1 female Interior Set Set in 1970 in the Hill District of Pittsburgh that is served by a makeshift taxi company, Jitney is a beautiful addition to the author's decade by decade cycle of plays about the black American experience in the twentieth century. "Explosive... Crackles with theatrical energy."- N.Y. Daily News "Could be described as just a lot of men sitting around talking. But the talk has such varied range and musicality, and it is rendered with such stylish detail, that a complete urban symphony emerges.... Drivers return from jobs with stories that summon an entire ethos.... Throughly engrossing, Jitney holds us in charmed captivity."- New York Times "Comic, soulful and immensely moving."- Time Out "A transport of delightSo vividly written ... it keeps you steadily amused, concerned and moved."- New York Magazine Winner of the New York Drama Critics Award for Best New Play and the Outer Critics Circle Award for Outstanding Off Broadway Play.