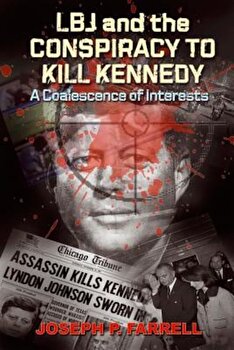 LBJ and the Conspiracy to Kill Kennedy: A Coalescence of Interests, Paperback/Joseph P. Farrell


Best-selling, Oxford-educated investigative author Joseph P. Farrell takes on the Kennedy assassination and the involvement of Lyndon Baines Johnson and the Texas "machine" that he controlled. Farrell says that a coalescence of interests in the military industrial complex, the CIA, and Lyndon Baines Johnson's powerful and corrupt political machine in Texas led to the event culminating in the assassination. Without the help of the Dallas police chief and others of the Texas underworld, including Jack Ruby, the Kennedy assassination could not have taken place. Farrell analyzes the data as only he can, and comes to some astonishing conclusions. Topics include: Oswald, the FBI, and the CIA: Hoover's Concern of a Second Oswald; Oswald and the Anti-Castro Cubans; The Mafia; Hoover, Johnson, and the Mob; The FBI, the Secret Service, Hoover, and Johnson; The CIA and "Murder Incorporated"; Ruby's Bizarre Behavior; The French Connection and Permindex; Big Oil; The Military; Disturbing Datasets, Doppelgangers, Duplicates and Discrepancies; Two Caskets, Two (or was that Three?) Ambulances, One Body: The Case of David S. Lifton; Two (or is that Three?) Faces of Oswald; Too Many (or Was That Too Few?) Bullets; Too Many Films, with Too Many, or Too Few, Frames; The Dead Witnesses: Jack Zangretti, Maurice Brooks Gatlin, John Garret "Gary" Underhill, Guy F. Bannister, Jr., Mary Pinchot Meyer, Rose Cheramie, Dorothy Mae Killgallen, Congressman Hale Boggs; The Alchemy of the Assassination: Ritual Magic and Murder, Masonic Symbolism, and the Darkest Players in the Death of JFK; LBJ and the Planning of the Texas Trip; LBJ: A Study in Character, Connections, and Cabals; LBJ and the Aftermath: Accessory After the Fact; The Requirements of Coups D'Etat; more."

Riddle in the Tale, Paperback/Taffy Thomas

The Myth of Race: The Troubling Persistence of an Unscientific Idea, Paperback/Robert Wald Sussman

Can't Buy My Love: How Advertising Changes the Way We Think and Feel, Paperback/Jean Kilbourne

Behind the Carbon Curtain: The Energy Industry, Political Censorship, and Free Speech, Paperback/Jeffrey A. Lockwood

The Israelis: Ordinary People in an Extraordinary Land (Updated in 2008), Paperback/Donna Rosenthal

Protecting Children and Adults from Abuse After Savile, Paperback/Marcus Erooga

Hubris: The Inside Story of Spin, Scandal, and the Selling of the Iraq War, Paperback/Michael Isikoff

The Philadelphia Experiment Murder: Parallel Universes and the Physics of Insanity, Paperback/Alexandra Bruce