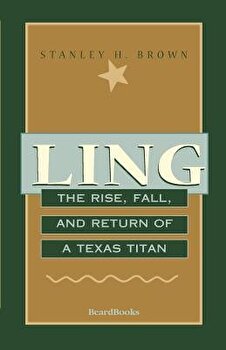 Ling: The Rise, Fall, and Return of a Texas Titan, Paperback/Stanley H. Brown

What was most remarkable about Jim Ling among the great players of corporate games is that he invented his own. And it worked for a while. In fact, he convinced some of the smartest people on Wall Street that he had a foolproof way. It has been more that 25 years since Ling strode the scene as creator and CEO of Ling-Temco-Vought, once the 14th largest corporation on Fortune's 500 list. When the financial magic he used wore off, he was ousted from the helm. They even changed the name to plain LTV to get his name off the facade that wound up as a bankrupt steelmaker. Without any education beyond high school in Oklahoma and electrician's training in the Navy during World War II, Ling discovered a way to create free money for a while. He called his series of acquisitions and spin-offs Project Redeployment, which made it sound like something grander than it proved to be. But while it worked, it was dazzling, even compared with Michael Milken's rediscovery of undervalued, high-yield (junk) bonds. Unlike Milken, a convicted felon, Ling was a man of integrity whose worst trouble with the law involved a minor regulatory matter. He believed in himself and his venture so thoroughly -- and wrongheadedly -- that he kept all his own and his children's money in his company's stock and was wiped out. The trouble with financial games is that they are easier to play than focusing on sound management and products, and they are surely more fun to watch.