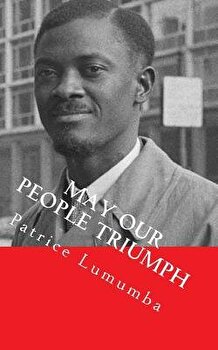 
This book contains Patrice Lumumba's speeches and Interviews. Lumumba was the first Prime Minister of the Democratic Republic of the Congo. He was born in Kasai province of the Belgian Congo. He was educated at a missionary school and worked in Leopoldville (Kinshasa) and Stanleyville (Kisangani) as a clerk and journalist. In 1955 Lumumba became regional president of a Congolese trade union and joined the Belgian Liberal Party. He was arrested in 1957 on charges of embezzlement and imprisoned for a year. On his release he helped found the Mouvement National Congolais (MNC) in 1958. In 1959 Belgium announced a five year path to independence and in the December local elections the MNC won a convincing majority despite Lumumba being under arrest at the time. A 1960 conference in Belgium agreed to bring independence forward to June 1960 with elections in May. Lumumba and the MNC formed the first government on June 23, 1960, with Lumumba as Prime Minister and Joseph Kasavubu as President. His rule was marked by the political disruption when the province of Katanga declared independence under Moise Tshombe in June 1960 with Belgian support. Despite the arrival of United Nations troops unrest continued and Lumumba sought Soviet aid. In September Lumumba was dismissed from government by Kasavubu, an act of dubious legality. On September 14 a coup d'etat headed by Colonel Joseph Mobutu (later Mobutu Sese Seko) and supported by Kasavubu gained power. Lumumba was arrested on December 1, 1960 by troops of Mobutu. He was captured in Port Francqui and flown to Leopoldville in handcuffs. Mobutu said Lumumba would be tried for inciting the army to rebellion and other crimes. United Nations Secretary General Dag Hammarskjold made an appeal to Kasavubu asking that Lumumba be treated according to due process of law. The USSR denounced Hammarskjold and the Western Powers as responsible for Lumumba's arrest and demanded his release. ATTN: BOOK SELLERS Visit http: //createspace.com/6169274 and buy this book at discounted price Discount code: PBXAGSKY