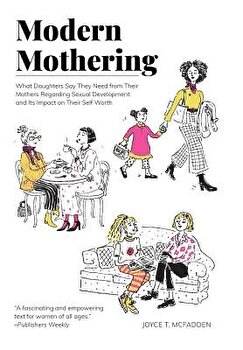 Modern Mothering: What Daughters Say They Need from Their Mothers Regarding Sexual Development and Its Impact on Their Self Worth, Hardcover/Joyce T. McFadden


Description Modern Mothering is based on psychoanalyst Joyce McFadden's unprecedented study of 450 women, in which women could talk about whatever was important to them, and it was the women of her study who determined this book's topic: how girls learn about sexuality from their mothers. Full of the narratives of women and girls, kept in their own words, hear what daughters say they need from their mothers when it comes to learning about their sexuality, and learn how much more present they want us to be throughout our lives together. We tend to view sexual development as something that occurs in the contained space of adolescence, but our daughters want us to know that over their lifetimes, the messages they get about sexuality--in- cluding our reluctance to talk about it openly--under- mine their development of confidence and self worth, not only sexually, but in all areas of living. They want us to understand the mother-daughter relationship isn't static--it changes over the years. And we don't really cross a line into being sexual, or in becoming a woman. It's a gradual process, and both young and adult daughters are asking for our help along the way. While other books have named the issues facing girls and women, Modern Mothering is unique in its offering of simple and prescriptive changes we can make to be there for our daughters in the ways they need us to be, whether they're two and asking where babies come from, or 35 and wondering how to weather the challenges of marriage. It's the emotional closeness to us our daughters crave, and McFadden's research reveals how speaking honestly about sexuality nurtures that bond.

Coming To Life Philosophies Of Pregnancy Childbirth And Mothering

I'm Just Happy to Be Here: A Memoir of Renegade Mothering - Janelle Hanchett