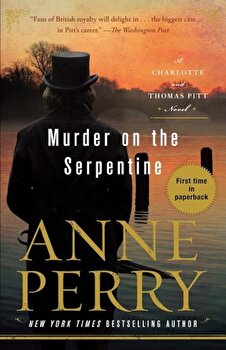 Murder on the Serpentine: A Charlotte and Thomas Pitt Novel, Paperback/Anne Perry


In the history of Anne Perry's bestselling Victorian mystery series, the stakes have never been greater than now--as a mission for queen and country places the future of the British Empire squarely in Thomas Pitt's hands. It is not the custom for the commander of Special Branch to receive a royal summons--so Thomas Pitt knows it must be for a matter of the gravest importance. The body of Sir John Halberd, the Queen's confidant, has been found in the shallow water of the Serpentine in Hyde Park, bearing the evidence of a fatal blow to the head. At Her Majesty's request, Sir John had been surreptitiously investigating Alan Kendrick, a horse-racing enthusiast who seems to have had an undue amount of influence on her son, the Prince of Wales. Now Commander Pitt must navigate the corridors of power with the utmost discretion and stealth, for it seems certain that Sir John's killer is a member of the upper classes. Aided by his wife, Charlotte, and her social contacts, Pitt seeks out the hidden motives behind the polite fa ade of those to the manner born--and uncovers a threat to the throne that could topple the monarchy. With Murder on the Serpentine, Thomas Pitt nears a crossroads in his brilliant career--one that promises new challenges, both professional and personal, still to be met. But first, he and Charlotte must conquer the twists and turns of suspense master Anne Perry's most cunningly crafted plot yet--to achieve their finest hour, or suffer their darkest. Praise for Murder on the Serpentine "For nearly four decades Anne Perry's riveting detective novels have played out against the backdrop of the Victorian era. Fans of British royalty will delight in Murder on the Serpentine , which spotlights the woman this British author reminds us was 'queen and empress of a quarter of the earth' during her 63-year reign. . . . Perry writes meticulously laid-out police procedurals, and Pitt's methodical investigation sets the novel's early, steady pace." -- The Washington Post "The mystery may follow familiar lines, but even newcomers are likely to be charmed by scenes that deepen Pitt's family relationships. This entry's main strength lies in the quiet, emotionally intelligent interactions among its characters." -- Publishers Weekly " Anne] Perry returns with another engrossing read brimming with superb period details and complex characters." -- RT Book Reviews "Marvelous . . . Perry delivers once again by simply doing what she does better than anyone else--capturing the flavor, spirit and political temperature of Victorian-era London." -- Bookreporter