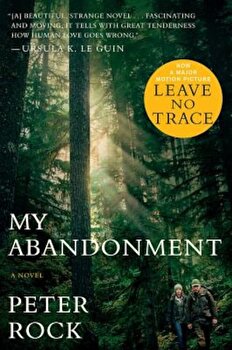 
NOW A MAJOR FILM, LEAVE NO TRACE , DIRECTED BY DEBRA GRANIK AND STARRING BEN FOSTER AND THOMASIN HARCOURT MCKENZIE "Poignant . . . My Abandonment lingers in the mind, leaving you as haunted as its mesmerizing characters."-- New York Post "This is probably the recent novel I recommend most... a] short, disciplined, unsettling book."--Hanya Yanagihara, author of A Little Life and The People in the Trees, for GQ A thirteen-year-old girl and her father live in Forest Park, an enormous nature preserve in Portland, Oregon. They inhabit an elaborate cave shelter, wash in a nearby creek, store perishables at the water's edge, use a makeshift septic system, tend a garden, even keep a library of sorts. Once a week they go to the city to buy groceries and otherwise merge with the civilized world. But one small mistake allows a backcountry jogger to discover them, which derails their entire existence, ultimately provoking a deeper flight. Inspired by a true story and told through the startlingly sincere voice of its young narrator, Caroline, My Abandonment is a riveting journey into life at the margins and a mesmerizing tale of survival and hope. "Original, unusual, and addictive."-- Oregonian " A] beautiful, strange novel . . . Fascinating and moving, it tells with great tenderness how human love goes wrong."--Ursula K. Le Guin

The Days of Abandonment | Elena Ferrante

The Journey from Abandonment to Healing - Susan Anderson