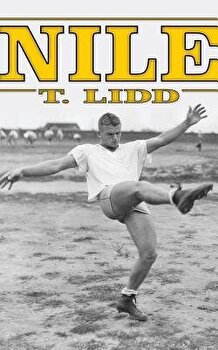 NILE is a story about a young man who played football in the late 1930s. But it is more than a sports story. The nation was still recovering from the Great Depression and on the cusp of the greatest war in the history of mankind. One athlete, in particular, understood the historical significance of the moment. Many people who knew Nile Kinnick sincerely believed he would have been one of our nation's greatest leaders. Unfortunately, the country never had the opportunity to witness what this promising young man may have achieved. The story tells of Kinnick's life from high school to his ill-fated flight near Trinidad during WWII. But it's also a story that touches on the lives of his Iowa Hawkeye teammates. They became known as the "Ironmen" because there were very few players on the 1939 team. After two losing seasons in 1937 and 1938, the University of Iowa hired Dr. Eddie Anderson to coach the football team. He was relentless in his pursuit to have the players in the best physical condition of any team in the nation. Many quit. But those that remained made history.