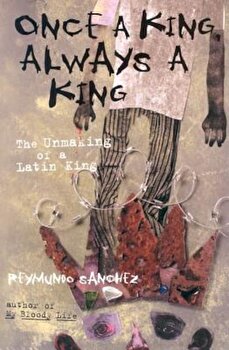 Once a King, Always a King: The Unmaking of a Latin King, Paperback/Reymundo Sanchez


This riveting sequel to "My Bloody Life" traces Reymundo Sanchez s struggle to create a normal life outside the Latin Kings, one of the nation's most notorious street gangs, and to move beyond his past. Sanchez illustrates how the Latin King motto once a king, always a king rings true and details the difficulty and danger of leaving that life behind. Filled with heart-pounding scenes of his backslide into drugs, sex, and violence, Once a King, Always a King recounts how Sanchez wound up behind bars and provides an engrossing firsthand account of how the Latin Kings are run from inside the prison system. Harrowing testaments to Sanchez s determination to rebuild his life include his efforts to separate his family from gang life and his struggle to adapt to marriage and the corporate world. Despite temptations, nightmares, regressions into violence, and his own internal demons, Sanchez makes an uneasy peace with his new life. This raw, powerful, and brutally honest memoir traces the transformation of an accomplished gangbanger into a responsible citizen. "

Once Upon a Castle

Moods and women and men and once again moods

Once Upon A Time in the East: A Story of Growing up | Xiaolu Guo

Everything All at Once | Katrina Leno

Quentin Tarantino's Once Upon A Time In Hollywood |