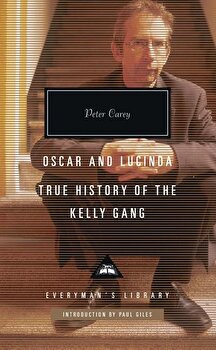 
Description Peter Carey's two Booker Prize-winning novels, in one handsome hardcover volume. Oscar and Lucinda is a sweeping, irrepressibly inventive novel set in nineteenth-century Australia. Oscar, a nervous Anglican minister who gambles on the instructions of the Divine, joins forces with Lucinda, a teenaged heiress who buys a glassworks to help liberate her sex. The resulting narrative tangle of love, commerce, religion, and colonialism culminates in a half-mad expedition to transport a glass church across the Outback. In True History of the Kelly Gang , the legendary Australian outlaw Ned Kelly speaks for himself, scribbling his narrative in semiliterate but magically descriptive prose as he flees from the police. To his pursuers, Kelly is nothing but a monstrous criminal, but to his own people he is a hero defying the authority of the English. In a dazzling act of ventriloquism, Peter Carey brings the famous bushranger wildly and passionately to life. About the Author PETER CAREY is a two-time winner of the Booker Prize. His other honors include the Commonwealth Writers' Prize and the Miles Franklin Literary Award. Born in Australia, he has lived in New York City for more than twenty-five years. PAUL GILES is the Challis Professor of English at the University of Sydney and author of numerous books, including The Global Remapping of American Literature and Transnationalism in Practice .