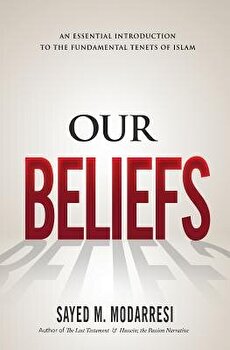 Our Beliefs: The Fundamental Tenets of Islam, Paperback/Sayed Mahdi Modarresi

Description In the heat of the battle of Siffin, while Imam Ali was faced with one of the most climacteric challenges against his authority, he stood to address his lieutenants when a Bedouin approached to ask a question. He said, "O' Commander of the Faithful, do you claim that God is One?" Anyone else would have snubbed the stranger at once. At a time when the only pertinent topic was military strategy, tactical engagement with the enemy, and preventing its vicious onslaught, this man came asking a question entirely irrelevant. Against the backdrop of clamoring swords, terrifying cries of death, and limbs scattered across the sand dunes, this wandering villager wanted an answer to a seemingly inconsequential theological query Some companions raised their voices in protest, castigating the villager and demanding that the meeting stay focused on the crisis at hand. Upon seeing the commotion, Imam Ali came to his defense, saying, "Leave him What he seeks is precisely what we want from these people our foes]." Explaining that it is the rejection of God which has caused their enemy to behave the way it did, he proceeded to provide a detailed and nuanced response to the question. It was a lesson for the troops to remember why they were at war, that their sacrifice meant something beyond patriotism or the euphoria of victory. It suggested the battles were not fought by Imam Ali in order to expand the empire or to seek conquest. It was a wake-up call that the defensive battle they were engaged in was to reclaim the freedom of those still shackled by ignorance; that matters of belief, especially those pertaining to God, are a step above even the most pressing crises; and there is no time or place where learning is in any way inapt. Imam Ali was trying to teach his men that the Bedouin's query had not just a peripheral correlation with the issue at hand - that of a battle between good and evil - but that it was directly connected to their just cause in its every detail. The tenets of our religion form the bedrock of Islam, so much so that without a firm grounding in these beliefs none of our deeds have any value. Imam al-Baqer says: "No deed is of any benefit with rejection or doubt." This is because our actions stem from our beliefs, hence the priority given to the establishment of an unshakable creed & guard against confusion. This is also why the first question a person who leaves this world is asked is not about their acts of worship or their social standing, but "Who is your Lord? The central role of our creed is demonstrated yet again in this prophetic narration: "The example of this religion is like a firm tree; faith is its rootstock, prayer is its veins, almsgiving is its water, fasting is its fronds, morality is its leaves, and abstention from sins is its fruits. A tree is not complete without its fruit." The above narration demonstrates two key facts: First, the tenets of Islam are the foundation upon which all other acts are based. Much like a tree, they represent the roots, emphasizing their paramount position within the faith ecosystem. Understanding this also sheds light on how the actions of some Muslims can be so divergent from the religion they profess. We can begin to answer such questions as, "How could a so-called 'Muslim' be so savage as to commit unspeakable acts of brutality?" or even "Why is it that an otherwise good Muslim is sinful?" A treelike approach means such inquiries correspond to the boughs, while the cause of the problem lies in the rhizome. In other words, something within the pages of the book you hold in your hand is amiss, leading to a malignant growth that disfigures a beautiful religion and turns it into an errant monstrosity.