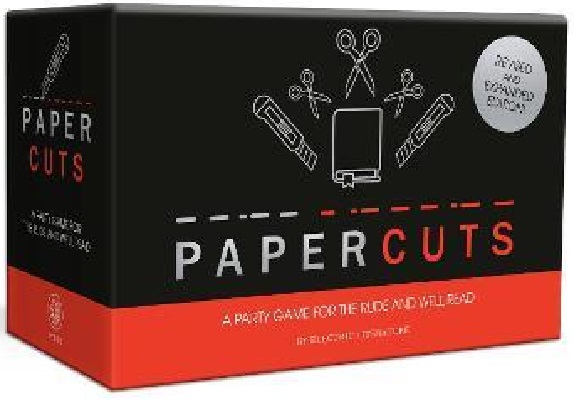 Papercuts : A Party Game for the Rude and Well-Read | Clarkson Potter


Show off your page-turning prowess and bust out your best book-themed jokes with this raucous party game full of literary laughs from the wordsmiths at the indie nonprofit Electric Literature.Papercuts is what Kurt Vonnegut, James Baldwin, and Virginia Woolf would play if they were alive, locked in a room together, and forced to play a card game. This party game for bibliophiles and pop culture fanatics follows an intuitive and popular game format, similar to Apples to Apples: the dealer lays down a Question card and each player must fill in the blank with one of the five Answer cards in their hand. What ensues is an endless loop of hilarious literary jokes and gut-busting gameplay.Sample questions include: • Why does the caged bird sing? • Are You There God? It's Me, __________. • Last year's Booker Prize-winning novel is told from the perspective of __________.Players can respond with answers like: • Flannery O'Connor's peacocks • Atticus Finch before he was racist • a fifteen-page sex sceneThis edition of Electric Literature's game boasts 100 question cards and 200 answer cards in a luxe, portable package. Toss it in a tote or bring it to your next party for countless chapters of enjoyment.Electric Literature is an independent nonprofit dedicated to making literature more exciting, relevant, and inclusive. In addition to the essays, criticism, and literary news on their digital platforms, Electric Lit publishes two acclaimed literary magazines, Recommended Reading and The Commuter. Electric Lit's published work has been anthologized in Best American Short Stories, Best American Essays, Best American Poetry, and Best American Comics, and recognized by the Pushcart Prize, Best Canadian Short Stories, and the Best of the Small Presses.