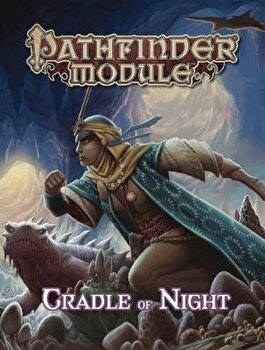 
Contributor(s): Author: Paizo Publishing The northern tracts of shadow-cloaked Nidal have long been a land of independence and defiance, but when a desperate refugee emerges from the earth's depths, the locals reach out for aid. This mysterious arrival desperately seeks help in saving his people--an ancient race that's become a willing thrall to shadow--before they unleash an unfathomable darkness upon the world. Cradle of Night is an adventure for 8th-level characters that leads heroes into the depths of the Darklands, the subterranean wilds of the Pathfinder world. There, adventurers must uncover the history of the elusive caligni race and learn one of the greatest mysteries of the Plane of Shadow if they're to have any hope of preventing the rebirth of a shattered god.

10,000 Things You Need to Know: The Big Book of Lists, Hardcover/Elspeth Beidas

Weaving on the 2ft Square Loom: A Collection of Plaids, Paperback/Ashli Couch

9 Simple Tips and Strategies for Winning the Pick 3 Cash 4 Lottery Games: The Definitive Guide for Learning the Mathematics of Random/S. B. I. P. 999

Become an Automobile Expert a Do It Yourself Guide to Cars 1st Edition: How to Buy, Inspect, Maintain, Troubleshoot and Fix the Most Common Problems i, Paperback/Alan Adran Delfin Cota

Unsinkable: How to Build Plywood Pontoons and Longtail Boat Motors Out of Scrap, Paperback/Robnoxious

Bully Busters and Beyond: 9 Treasures to Self-Confidence, Self-Esteem, and Strength of Character, Paperback/Phil Nguyen

Why Will No One Play with Me?: The Play Better Plan to Help Children of All Ages Make Friends and Thrive, Hardcover/Caroline Maguire