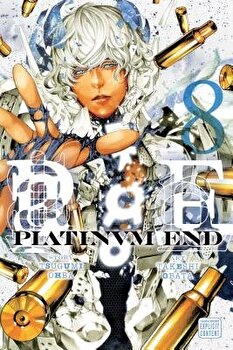 
Description From the creators of Death Note Mirai may have been saved by an angel, but his battle is just beginning... As his classmates celebrate their middle school graduation, troubled Mirai is mired in darkness. But his battle is just beginning when he receives some salvation from above in the form of an angel. Now Mirai is pitted against 12 other chosen humans in a battle in which the winner becomes the next god of the world. Mirai has an angel in his corner, but he may need to become a devil to survive. It's white arrow vs. red arrow as Mirai faces off against Metropoliman in a shootout to decide the next god. As each god candidate fires their arrows, the conclusion to the battle draws closer. But what sinister secrets lurk behind Metropoliman's motives? About the Author Born in Tokyo, Tsugumi Ohba is the author of the hit series Death Note and Bakuman . Takeshi Obata was born in 1969 in Niigata, Japan, and first achieved international recognition as the artist of the wildly popular Shonen Jump title Hikaru no Go , which won the 2003 Tezuka Osamu Cultural Prize: Shinsei "New Hope" Award and the 2000 Shogakukan Manga Award. He went on to illustrate the smash hit Death Note as well as the hugely successful manga Bakuman ? and All You Need Is Kill.