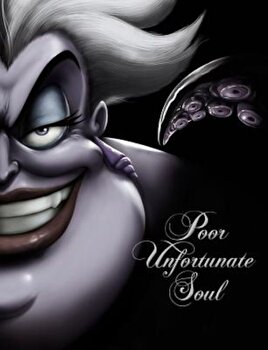 
The tale of the sea king's daughter Ariel is a beloved one of losing-and then finding-one's own voice. The story has been told many times and in many ways. But always the mergirl wants more than her world can offer, and her father demands that she live within the confines of his domain. Her rebelliousness costs the little mermaid her voice and nearly her soul. But the power of good prevails, and Ariel emerges proud and unchanged. And yet this is only half the story. So what of Ariel's nemesis, Ursula, the sea witch? What led to her becoming so twisted, scorned, and filled with hatred? Many tales have tried to explain her motives. Here is one account of what might have shaped the sea witch into a detestable and poor unfortunate soul.

Rich Dad Poor Dad: What the Rich Teach Their Kids About Money That the Poor and Middle Class Do

A Series of Unfortunate Events

The Reptile Room (A Series of Unfortunate Events)

The Incomplete History of Secret Organizations: An Utterly Unreliable Account of Netflix's A Series of Unfortunate Events - Joe Tracz

The Tyranny of Experts: Economists, Dictators, and the Forgotten Rights of the Poor