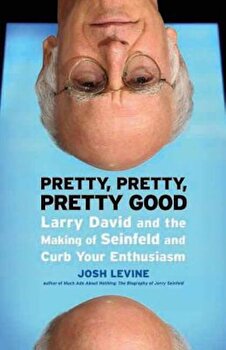 
?As a comedian, then producer of Seinfeld, and now the creator and star of Curb Your Enthusiasm, Larry David has a fanatical following. In his early stand-up days, if he walked on stage and didn t like the crowd, he would walk off. Together with Jerry Seinfeld, he pitched NBC on a sitcom where nothing happens. A whole show could be about waiting in line at a Chinese restaurant. And somehow Seinfeld became the most successful comedy show of all time. After nine years of writing and producing Seinfeld, and after making a huge amount of money, Larry David began to create a new show for HBO. Without much separation between himself and the character he plays, Curb follows the daily routines of Larry David. Being politically correct is far from Larry s mind, and the audience cringes as he berates, torments, and blusters his way into the hearts of TV watchers. Follow the early exploits of Larry s stand-up career, his days writing for Seinfeld, and learn how Curb was conceived and developed. Pretty, Pretty, Pretty Good titled after Larry s key catchphrase also explores Larry s on- and off-screen relationships with famous pals like Richard Lewis, Ted Danson, Mary Steenburgen, and the cast of Seinfeld, and contains an in-depth episode guide to Curb Your Enthusiasm."

Pretty Odd | Panic! At The Disco