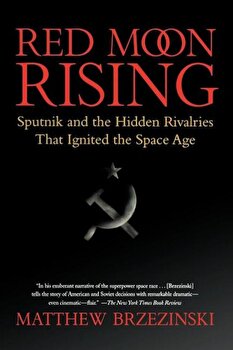 
``In his exuberant narrative of the superpower space race . . .Brzezinski] tells the story of American and Soviet decisions with remarkable dramatic--even cinematic--flair.``-- The New York Times Book Review In Red Moon Rising , Matthew Brzezinski recounts the dramatic behind-the-scenes story of the fierce battles on earth that preceded and followed the launch of Sputnik on October 4, 1957. He takes us inside the Kremlin, the White House, secret military facilities, deep-cover safe houses, and the halls of Congress to bring to life the Russians and Americans who feared and distrusted their compatriots at least as much as their superpower rivals. Drawing on original interviews and new documentary sources, Brzezinski tells a story rich in the paranoia of the time. The combatants include three U.S. presidents, survivors of the gulag, corporate chieftains, ambitious apparatchiks, rehabilitated Nazis, and a general who won the day by refusing to follow orders. The true story of the birth of the space age has never been told in such dramatic detail, and Red Moon Rising brings it vividly and memorably to life.

Rise of the Machines: A Cybernetic History, Paperback/Thomas Rid

Wonderland: How Play Made the Modern World, Paperback/Steven Johnson

Google Glass: The Ultimate Guide for Understanding Google Glass and What You Need to Know, Paperback/Brad Durant

The Grid: The Fraying Wires Between Americans and Our Energy Future, Paperback/Gretchen Bakke

Into the Anthropocosmos. A Whole Space Catalog from the MIT Space Exploration Initiative, Hardback/Catherine Coleman

Human Moment. The Positive Power of Compassion in the Workplace, Paperback/Amy Bradley