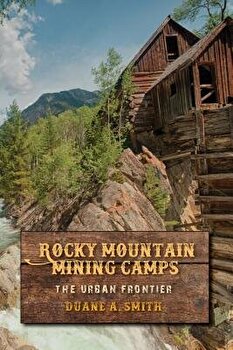 Description Traditionally the American frontier was the home of the self-sufficient individualist, a rural environment where settlers lived without the comforts of society. But from the first gold rush into the Rockies in 1859 until the 1890s, when most gold fields had been played out, the unsettled wilderness of the Rocky Mountains became the setting of a unique phenomenon--the Western mining camp. To be profitable, miners needed a community of support--including secure lines of transportation, farmers who could raise crops, and merchants who could supply equipment. The lure of easy money also attracted a drifting crowd of gamblers, prostitutes, and con men, and a saloon and a brothel often were the first businesses to appear in a prospering mining town. Unstable populations and a lack of planning exacerbated the problems of the mining camps, including lawlessness, destructive fires, and rough-and-ready vigilante justice, but most maturing communities stabilized and quickly established schools, churches, and libraries. In this absorbing history of the Rocky Mountain mining towns, Duane A. Smith traces their cycle of growth from birth to boom and either extinction or transformation into permanent agricultural-mining communities, and he recounts colorful histories of camps that sprang up overnight and developed into urban settlements. About the Author Duane A. Smith is author ofA Colorado History, Horace Tabor: His Life and the Legend, Silver Saga: The Story of Caribou Colorado, Colorado Mining: A Photographic History, andFortunes Are for the Few: Letters of a Forty-Niner.