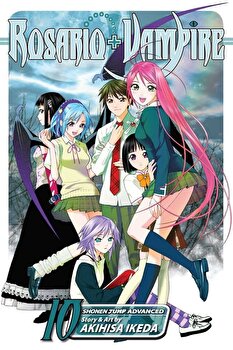 
Tsukune's new classmates are monsters--really ; At Tsukune's school, the turf war isn't between the jocks and the nerds, it's between the vampires and the werewolvesR to L (Japanese Style). LESSON TEN: MAGIC MIRROR QUIZ A MAGIC MIRROR THAT REFLECTS THE TRUE NATURE OF WHOEVER LOOKS INTO IT IS BEST USED TO... a. pop your zits. b. pick your friends. c. devour your soul. All-around average teenager Tsukune can't get accepted to any high school save one...but on his first day, he finds the rest of the student body doesn't appear average in the least. Best of all, the cutest girl on campus can't wait to fling her arms around his neckWait a sec'--are those her teeth around his neck too...? Tsukune's going to have one heck of a hickey when he gets home from Monster HighBut does he have a chance in H-E-double-hockey-sticks of raising his grades at a school where the turf war isn't between the jocks and the nerds but the vampires and the werewolves ?

The Vampire Chronicles Collection: Interview with the Vampire, the Vampire Lestat, the Queen of the Damned, Paperback/Anne Rice