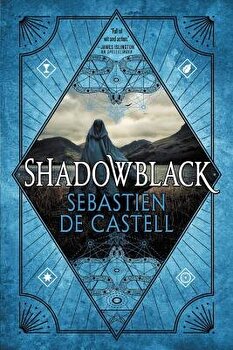 
A failed mage turned outlaw must use guile and a handful of spells to challenge a dangerous rival in the second book of an exciting adventure fantasy series from Sebastien de Castell. Forced to live as an outlaw, Kellen relies on his wits and his allies to survive the unforgiving borderlands. When he meets a young woman cursed with a deadly plague, he feels compelled to help. But her secrets draw powerful enemies and it's not long before Kellen is entangled in a conspiracy of blackmail, magic, and murder. As the bodies begin to pile up, Kellen fears he's next. The second novel in a compelling six-book series, bursting with tricks, humor, and a whole new way to look at magic. Spellslinger Series Spellslinger Shadowblack Charmcaster For more from Sebastien de Castell, check out: The Greatcoats Quartet Traitor's Blade Saint's Blood Knight's Shadow Tyrant's Throne About the Author: Sebastien de Castell is the author of the acclaimed swashbuckling fantasy series, The Greatcoats and the Carnegie Medal-nominated Spellslinger . His debut novel, Traitor's Blade , was shortlisted for both the Goodreads Choice Award for Best Fantasy and the Gemmell Morningstar Award, the Prix Imaginales for Best Foreign Work, and the John W. Campbell Award for Best New Writer. He spends his time writing, travelling, and going on adventures. Visit him at www.decastell.com