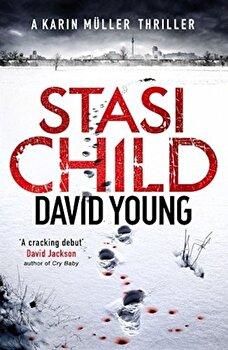 When Oberleutnant Karin Muller is called to investigate a teenage girl's body at the foot of the Wall, she imagines she's seen it all before. But when she arrives she realises this is a death like no other. It seems the girl was trying to escape - but from the West. Muller is a member of the People's Police, but in East Germany her power only stretches so far. The Stasi want her to discover the identity of the girl, but assure her the case is otherwise closed - and strongly discourage her from asking questions. The evidence doesn't add up, and it soon becomes clear the crime scene has been staged. But this is not a regime that tolerates a curious mind, and Muller doesn't realise that the trail she's following will lead her dangerously close to home ...   David Young was born near Hull and - after dropping out of a Bristol University science degree - studied Humanities at Bristol Polytechnic. Temporary jobs cleaning ferry toilets and driving a butcher's van were followed by a career in journalism with provincial newspapers, a London news agency, and international radio and TV newsrooms. He now writes in his garden shed and in his spare time supports Hull City AFC.